Would you like to find out which is the best bike on the market?

This is a good question, a source of heated discussions between every self-respecting biker.

This time, however, the answer will be very simple.

The best bike on the market is .... the one that suits you best!

I know, the answer may seem trivial, but if you let me explain you will understand that there is no absolute best bike but there is the best bike for you.

Let's see together why

As beautiful as an MV Brutale can be, if you have chosen a bike for long journeys, the Brutale is certainly not a good bike for you. As great as it may be, it's definitely not one of the most comfortable bikes you can find in dealerships.

If you love to ride between the curbs of a track, the Suzuki V-strom will certainly not be the most suitable bike to set the record time at Laguna Seca.

Consequently, the choice of the bike is a very personal matter, we evaluate the final use, the budget available, the aesthetics (aesthetics play a very important role in the choice, even if we always pretend that it is only marginal), the reliability of the brand and so on.

In short, there are many variables that come into play, and if you have chosen the bike you have or want to take, because according to your needs, this is the best bike (for YOU). 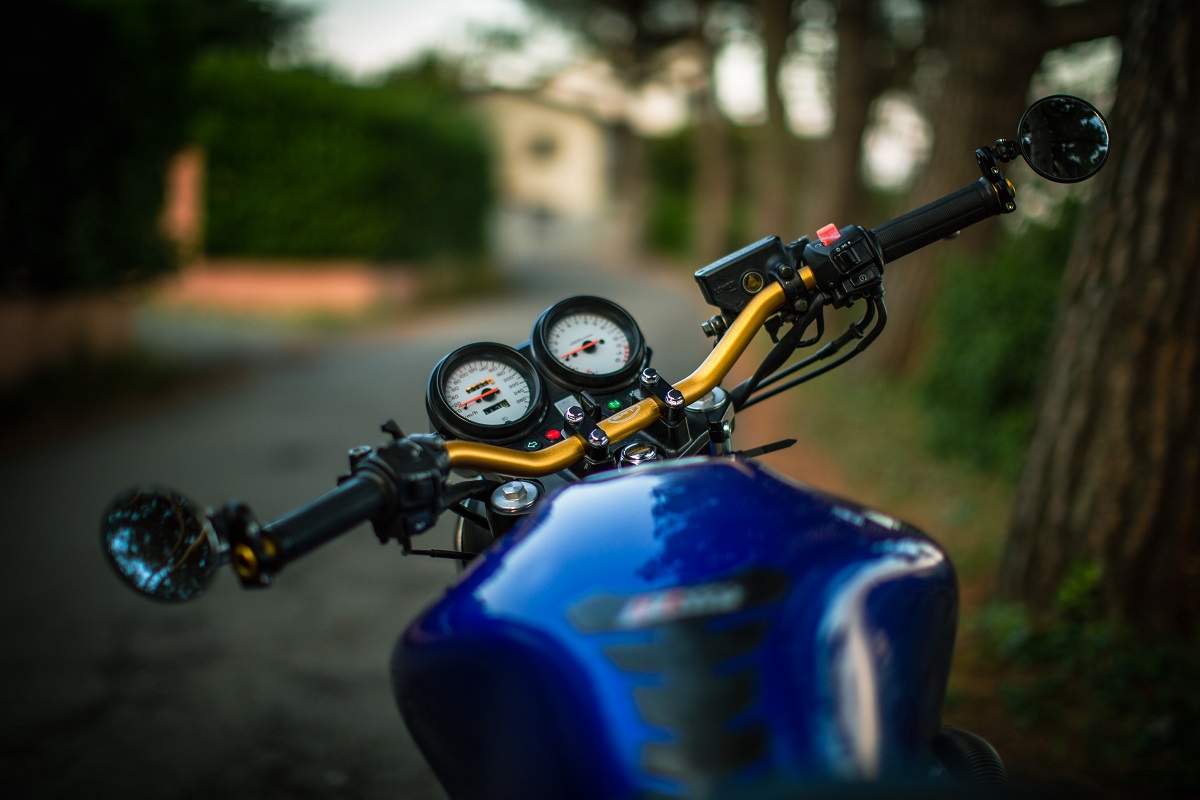 But maybe you don't know that your bike can radically improve.

The choice of the bike is personal, but it doesn't mean that you can't improve something, on the contrary ...

Often thousands of euros are spent to modify the bike; you change suspensions and exhausts, you mount carbon parts, but then you forget the simpler things that really change the handling of the bike, actually improving it!

We are talking about the handlebar.

The SRT handlebar, for example, allows you to obtain various advantages, it helps you to ride the bike better, improve the riding position by reducing vibrations.

As he did for example for Elia, one of our customers who, after trying an SRT handlebar, bought it again for his new bike.

What I will tell you really very few motorcyclists know and maybe you are not aware of this too!

I'm talking about one of the biggest causes of motorcycle riding problems.

In fact, most motorcyclists have no idea how the handlebars can change the handling of the bike.

Now, after reading our emails and our  GUIDES, it  will seem obvious.

You may be thinking that the handlebars are all the same, that one brand is as good as another, or even worse, that the original handlebar is the right handlebar for your bike.

But if that were the case, we wouldn't be selling so many handlebars to riders looking to improve their bike!

And do you know why the most careful riders choose an SRT Factory handlebar to improve their bike?

Because only SRT handlebars really solve the problems related to riding, reduce vibrations, improve the position on the saddle and above all make your bike more beautiful.

All these things I tell you will remain just words until you try an SRT Factory handlebar too.

Only then will the facts speak for us and our handlebars.

And that is why almost all of our customers, when they buy a new bike, buy the SRT handlebar as soon as they leave the dealer.

They want to experience the same riding sensations again that they experienced with our handlebars the first time, on every bike they buy.

Unfortunately, you will only be able to understand what I'm talking about when you decide to try one of our dumbbells.

Here, for example, you can read one of our hundreds of reviews

I AGREE WITH SRT!

A very rare claim these days, but that's what a biker wrote about our products.

This is why I wanted to bring it back to you by reading this response we received on Facebook from Marco.

Although he has never (as he writes in the post) tried any of our handlebars, he fully understood our mission.

We are really pleased to share your point of view.

"I agree with SRT
Since I was 20 I have suffered from pain in the spine v. So the "posture" on the bike has always been fundamental, in addition to the fact that actually, as I have always explained to my friends and / or customers: to obtain optimal driving of your vehicle "As well as driving a car "..and even more so when driving a motorcycle it is important to be as" single body "as possible with the controls, and last but not least (the handlebar) in its height, forward movement, as well as backwardness and inclination of the handle. But also the inclination of the brake and clutch levers and IDEM for the footpegs, the same speech and respective levers (brake and gearbox)
As far as all these components are concerned, in order to obtain a correct riding position and therefore an equally correct posture, correct registration of the aforementioned is important (as far as possible on purely series motorcycles, even more so since they are standardized). Going back to mine, I'm 1.76 tall and weigh almost 100kg now, as a "fast" motorcyclist I own a 2000 CBR900RR Fireblade is not the top of comfort but even if it is all original, having registered the commands by adapting the inclinations to my physical journey great; relaxed ankles but always ready to act, wrists and hands, the same. Now, having said that (get to the point, no kidding!) The only thing that really gives me problems at some point in the trip, guys, are the handlebars !! (Semi dumbbells) why,
In conclusion, (standard) motorcycles are studied, yes, but conceived on a standard, on an average of physicists, in fact (standard) on average in short.
So, assuming that (really) I don't know SRT for how little I have been able to read here, I congratulate them and support them in their choice or (politics) if you like, as I grew up in a family of motorcyclists such as: my father and my two brothers before me were motorcyclists and then I myself who have chosen for passion to make it my profession since my 14 years not yet completed and for almost 40 years as a repairer and for a few years also as a mechanic on the track and then a pilot, I think that some good advice is able to give it. The motorcycle (possibly) must be "customized" to oneself! To your stature, to your body! TRY! Even if you think your bike fits you perfectly, try asking for more!
GOOD SRT  ? "

I have not changed a comma of what he wrote, I just brought back the text.

As you can see, whatever bike you have chosen, it is certainly possible to improve it, obtaining your perfect bike, sewn on yourself. 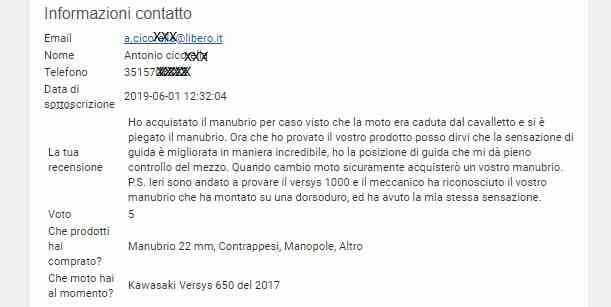 "Let me be clear I wish you to sell millions of handlebars .. but on the other hand a company that manufactures aftermarket handlebars I don't think would recommend the original handlebar even if it were better ..."

I also wanted to take a cue from this message that a biker sent us via Facebook, so for fairness we don't just take the positive comments.

I would like to try to make you understand definitively why we make our handlebars.

Let's be clear, there are bikes that have special components, including the handlebars, and this certainly helps to place them among the best bikes on the market.

But very few series motorcycles have these special components ...

Most motorcycles (even the most expensive models) have mass-produced components that must be within certain characteristics and above all certain budgets.

You may not know it, but we stopped producing for the houses precisely because we no longer wanted to "submit" to the mandatory conditions that this type of production obliged us to do.

The choices were 2; or concentrate on large numbers, lowering the quality to stay within the "forced" costs of mass production, or abandon the work for the houses that produce motorcycles and concentrate ONLY on the realization of SRT handlebars.

We chose the second option, in this way we were able to concentrate all the energies on our dumbbells.
Although the choice not to work with the manufacturers was not easy, it allowed us not to steal precious time and resources from the development of our handlebars.

Believe me, we are happy to let other producers take this kind of order "in the belly".

We prefer to continue making handlebars to our own standards and not to those of mass production and cost reduction.

I know, I really understand that some think that the original handlebars are "specially designed for the bike" or that there is nothing better.

It is a classic to think that "the parent company" makes the best components, especially for the bike on which they will be mounted.

But as we always say, we could have clone the measurements and the shape of the original handlebars and sell them as an alternative spare ...

Instead we go even to the opposite, "screaming" at you that:

The handlebar like the original CANNOT be found at SRT.

We will continue to reiterate it despite the difficulties that this choice creates.

Because it would be easier to say to you:

"Dear motorcyclist, here is the handlebar that is the same as yours but more beautiful and colorful at a lower price than your standard handlebar."

But we have chosen to go against the grain, creating handlebars that solve the driving problems that plague motorcyclists' bikes (and almost certainly yours too).

If the stock handlebars were so beautiful and performing we would have stopped working for some time, instead every year we collect hundreds of testimonies of driving problems solved with the SRT Factory handlebar.

Only in this way do our customers get real benefits.

I am writing all this not to "give you against" but to explain why we do this, because we have abandoned the production for the houses focusing only on our handlebars with our specific shapes and sizes to give the best to you, the final customer.

Instead of choosing to copy the stock handlebars, we try every day to give riders a better ride with the SRT Factory handlebars.

Only in this way will you make your bike the best bike on the market.

MAKE YOUR BIKE BETTER WITH A MANURIO SRT FACTORY