Our handlebar specialization has led us over time to identify some common problems that can be encountered when installing a new handlebar on your motorcycle.

Whether the installation work is carried out independently, whether it is mounted by a workshop or by a mechanic, the problems that arise are almost always the same, and in particular they are these 3:

- the handlebar does not mount because the cables do not arrive

- the handlebar touches the tank (or other part of the bike)

- I cannot mount accessories on the handlebar

In this article we will focus in particular on the first and last statement, because the topic "handlebar can touch the tank" we have already seen and treated in  THIS ARTICLE  .

As we have explained, the SRT handlebars are designed to improve riding, consequently their shape is not born to "adapt" to the bike, but to enhance the ride.

This is an eventuality that can happen mostly on models that are born as naked and then the project is revised by adapting it to become a tourer with larger domes and tanks, which create problems with installing normal handlebars.

To solve this design problem, some manufacturers adopt extremely long risers, or handlebars with excessively high folds just to avoid contact during maneuvers.

So, if this is your case, I recommend that you take a look at  THIS ARTICLE

Having said that, let's focus on the 2 other problems we haven't covered yet:

- the handlebar does not mount because the cables do not arrive

- I cannot mount accessories on the handlebar

Handlebar that does not mount because the cables do not arrive

It may happen that some customers, after taking the handlebar, tell us that the handlebar cannot be mounted because the cables are short and do not arrive.

Usually the options are 2, either they try to mount the handlebar directly, or have the handlebar mounted at a workshop or mechanic.

I pause for a moment on this topic, because in over 10 years of experience in this area, we have understood that there are pros and cons in both cases.

Those who decide to mount the handlebar by themselves, have all our esteem and we provide both a sheet with some instructions and general indications, and a page with some  VIDEO GUIDES ON THE ASSEMBLY OF THE HANDLEBAR , but those who come across this kind of activity, must take into account one factor - that the handlebar may require some adjustments, even minimal, but mandatory in order to fit it.

You don't see what an orthopedic surgeon does who works on your bones with a saw, drill and hammer, but you can only see the final result.

The same goes for the installation of the handlebar.

You have to be ready to "get your hands dirty" a little, because when you have it mounted by your mechanic you only see the final result, you don't know what he did and above all how he did it ...

I am writing this to you because some begin to mount the handlebar, then at the first hole they have to make, perhaps to widen the hole in the handlebar to install a handguard they get stuck.

So it's one thing to see the final result when you go to pick up the bike and it's another thing to experience it and do it directly.

But even if you decide to have the handlebar mounted by a workshop keep in mind that, very often, the authorized workshop (the official one) could resist mounting the handlebar, liquidating you with a nice "does not mount"!

Unfortunately it often happens, because the authorized workshops work with very precise times, and fitting an aftermarket handlebar can create unexpected events or delays that increase the time to be dedicated, so they prefer to mount the stock handlebar.

There are workshops that mount aftermarket handlebars and others that "complain", unfortunately it all depends on the person in front of you.

The same goes for mechanics, there are some mechanics who still love this kind of work, and others who live on profit, and prefer to do 3 oil changes rather than mount a handlebar, because the time taken is very similar, but the gain on 3 oil changes is greater.

Unfortunately there are many good mechanics, but the "poor", incapable and listless ones outnumber them, if you are lucky you are in good hands ... 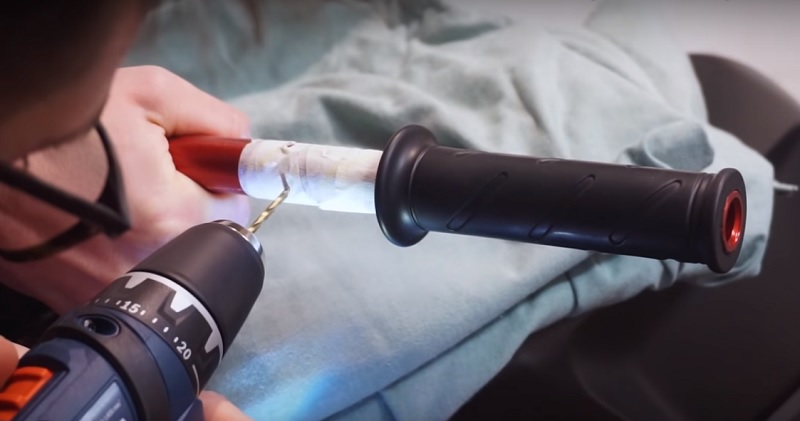 I wanted to make you this premise because we have some customers who complain that the cables do not arrive or that they are too short for the handlebars.

We certainly don't do it because we like to use more material unnecessarily;)

Oh, if you didn't know yet, our handlebars are longer because this helps improve the ride of the bike (combined with other handlebar factors, such as shape).

As a result, you have a handlebar in your hands that is perhaps 5/10 cm longer than the original handlebar.

But don't worry, if you have a "classic" and widespread bike on the market, we GUARANTEE that your cables are long enough to also mount with the SRT handlebar.

Statistically, about 10% of those who buy an SRT handlebar make this observation, asking us for support.

So one in 10 people, perhaps due to inexperience, perhaps because they ran into the wrong mechanic, has problems with the installation and assembly of the handlebar due to short cables.

But in all cases the cables, in reality, are not short, they just need to be repositioned.

In fact, in any case, in the end, the handlebar can always be installed on the bike simply by making the cables make a different turn, loosening some registers, modifying the position of some command.

On all the bikes for which the SRT Factory handlebar is recommended it is because it has already been installed over and over again.

I remind you that we have been producing and selling dumbbells for over 10 years, dumbbells only, every day, all day, following thousands of customers a year.

Let's say we eat bread and handlebars, so we know exactly the bikes on which the SRT handlebar cannot be installed and in these cases we do not recommend mounting it.

But if you have a Monster from first to last, if you have a Hornet, if you have a Street Triple, a Tuono, a GSR, a GSX-F (yes also the 750), one of the various Kawasaki Zeta, an MT07, a Tracer , a V-Strom, a StreetFighter, a Tiger .... in short, one of the classic popular bikes, which circulate normally, I assure you that the handlebars mounts well and the cables are not short, but they arrive without having to be replaced.

Why can we make sure this?

Well, in addition to the fact that we live on dumbbells, we are made of dumbbells and we breathe dumbbells, we also have dozens of reviews, photos and testimonials of various installations performed by people like you.

So we can say this because we have tried and we know with certainty that the handlebar is compatible.

Here, for example, we have included some collections of the various handlebar assemblies, with relative photos and testimonies  MANUBRIOMOTO.NET

It is a site created specifically to help those who have difficulty in editing.

But if that's not enough, we can also put you in touch with those who have already mounted the handlebars before you to give you support in the most complicated steps.

Can cutting the handlebar be a solution?

I would still like to talk to you about a question, which I often read on the forums or on Facebook, written by some "experts".

There are many motorcyclists who are afraid that the handlebars will not mount.

Cutting the handlebars is not a problem in itself and does not involve any risk, so it can be done.

But that's not the correct solution.

First because the cables are not really short, I want to reassure you about this aspect, if you took an original SRT Factory handlebar, and we have confirmed it, it is because we know that the cables arrive without particular problems and without having to cut or shorten the handlebar.

Second, and it is the reason why you should avoid cutting the handlebars, it is because our handlebars are designed to improve the ride of your bike, and the measures it has are not random, but specific to get a better ride.

Cutting it is equivalent to making a change that can make driving worse.

Would you ever cut a fork to lower the bike? Or you would thin a disc because it doesn't fit in the calipers!

You can ONLY do it if you know what you are doing perfectly and in any case with the risk that the final result will be worse.

So avoid cutting the handlebars ... or ask us for advice instead 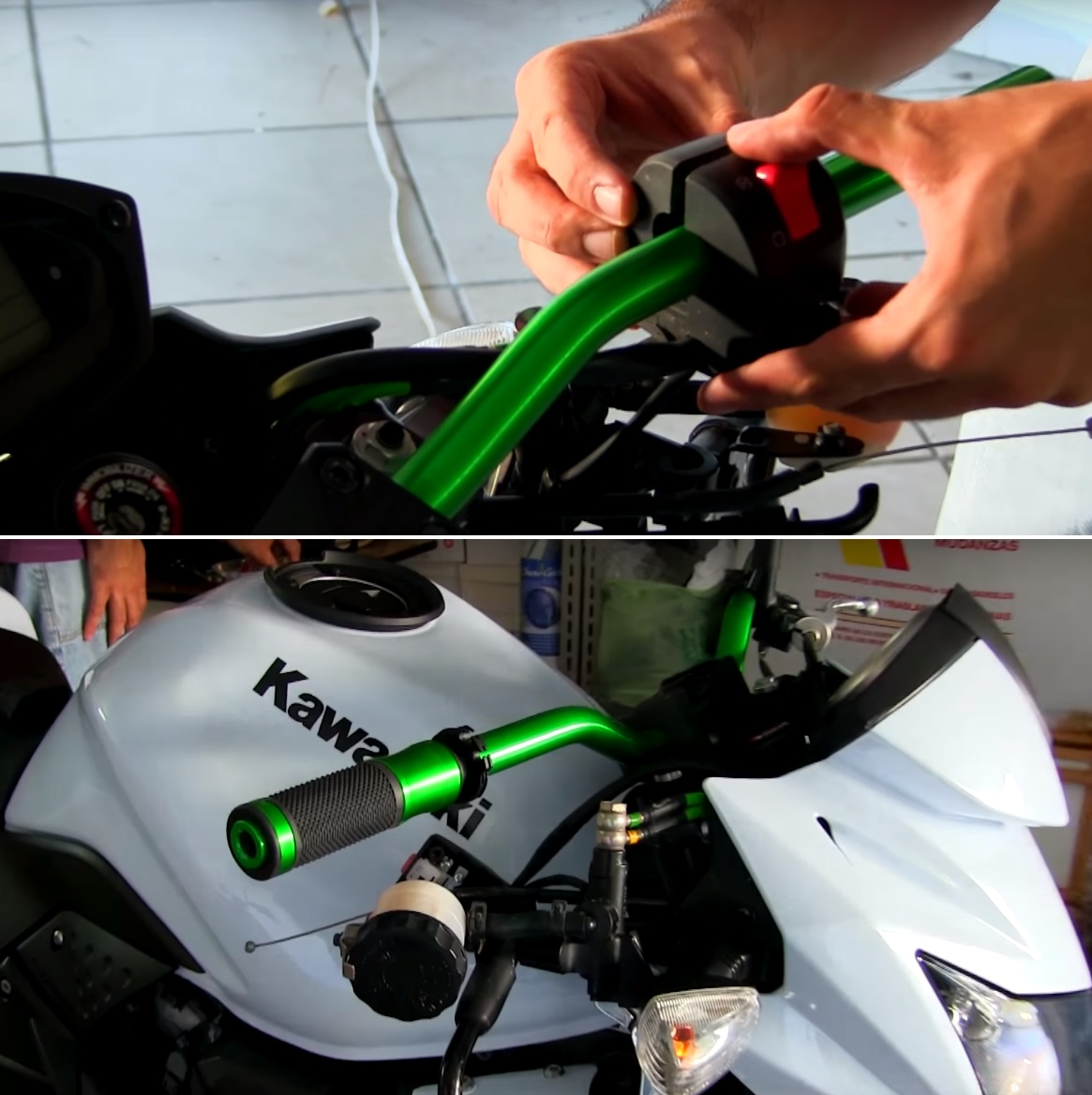 Mount the accessories on the handlebar

And now let's move on to the second case, that of installing accessories on the handlebar, such as handlebar end mirrors, counterweights, handguards, cruise control or heated grips.

When you take an aftermarket handlebar, some accessories often need to be adapted. This isn't usually a complicated procedure, but be aware that some minor adjustments may need to be made.

First we divide the standard accessories from the aftermarket ones.

The standard accessories almost always have to be adapted to the new handlebar, because the stems are rarely compatible.

The original handguards and counterweights normally require an expansion "plug" in order to be mounted.

Also in this case, on motorcycles with hand guards, such as Hypermotard, V-strom, or Tracer 700/900 (and many other motorcycles), they can be mounted without problems with a minimum of work.

An expansion kit, or even a simple masonry plug helps with the installation, it's nothing complicated, just a little extra work is needed.

As for the counterweights, we always recommend combining our models, which are made and designed specifically for the SRT handlebar, you may have some difficulties in inserting them, but (see instruction booklet and assembly advice that we include in the package), with a little soap, they enter without problems.

Our expansion kits are purposely to be forced into the handlebar, this is not a shipping error.

I know, it's complex, but once you put them on, you will never lose anything, from the counterweight to the 450 gram mirror :).

As for the aftermarket accessories, usually, these are already supplied with different universal mounting kits.

Most accessories have one or more expansion kits to fit various handlebars.

The only modification you may have to make is to widen the hole at the end of the handlebar to fit your accessory, but all you need is a drill bit and a little patience.

The stock grips of your bike mount on our handlebars, both 22 and 28 mm, there is no problem, with one exception.

If the original knobs are glued, in this case, sorry, they need to be cut and replaced with new knobs.

I wish you a good editing;)